Above is a photo of the Lviv Philharmonic Orchestra. The musicians rehearse amidst humanitarian aid supplies. They transformed their concert hall into a relief hub, and themselves into an emergency humanitarian organization. This is the type of group BlueCheck supports—grassroots, innovative, and motivated.  And Ukrainian.
‍
BlueCheck Ukraine identifies, vets, and fast-tracks urgent financial support to Ukrainian NGOs and aid initiatives providing life-saving and other critical humanitarian work on the front lines of Russia’s war on Ukraine.  They have the proximity, local knowledge and access to assist those in desperate need.  But they need help.
‍
A recent review by Humanitarian Outcomes, funded by the UK Humanitarian Innovation Hub, concluded that only $6.4 million (0.24%) of the more than $2.6 billion that has been donated to Ukraine-related humanitarian response efforts since February have gone to local organizations providing virtually all of the assistance inside the country.

Since March, BlueCheck has identified, vetted and funded several frontline organizations needing immediate financial support to continue operations. And we continue to raise money to support on-the-ground assistance. Help us help them. 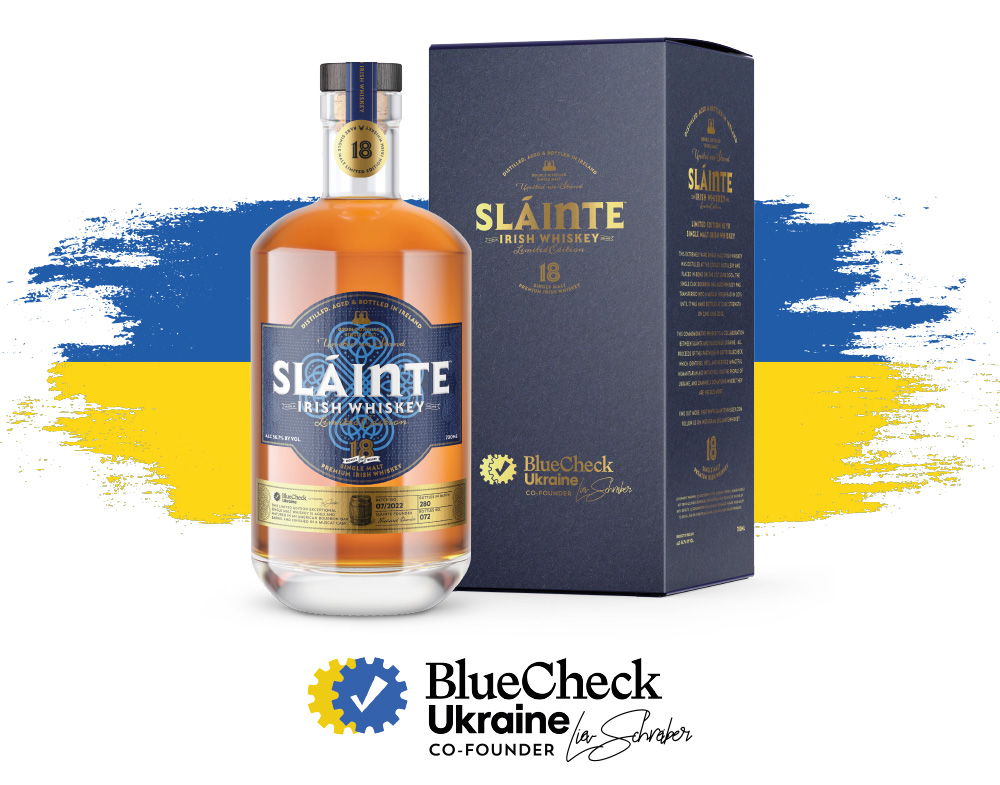 Announcing the release of the extremely rare BlueCheck Edition 18 year old Irish Whiskey by Sláinte. Only 300 bottles total will be available.

Credibility and accountability are central to our mission: we work with verified networks and reliable organizations to find local groups doing high-impact work. No organization makes it into BlueCheck without a referral from trusted partners. Our team also tracks up-to-date needs with the Ministry of Health and our partners.

With the assistance of global legal and due diligence partners, BlueCheck conducts a thorough vetting of prospective Ukrainian-based and nearby grassroots organizations for donor consideration. Donor reports on the supported organizations’ humanitarian operations are provided to ensure transparency and accountability.

Our fiscal sponsor operates as the financial conduit for BlueCheck-raised funds for vetted and approved organizations. The goal is to distribute as much funding to frontline organizations and initiatives as rapidly and responsibly as possible while ensuring funds are allocated and spent on high-impact operations.

The Russian invasion of Ukraine continues to inflict immense suffering. The war is becoming more brutal daily, with little regard for civilians trapped by the fighting. International aid organizations struggle to reach the most affected parts of the country and, in some cases, have themselves been targeted. Many operate only on the periphery of the war and may be forced to evacuate personnel and scale back operations as security further deteriorates.

The Ukrainian people are not waiting for the outside world to help. Risking their own lives, they evacuate civilians from areas under intense Russian bombardment, organize distributions of food, medicine, and other essentials to trapped and displaced people, and operate 24-hour mental health hotlines for traumatized Ukrainians, among various other aid operations. They’ve transformed themselves from musicians into humanitarian aid workers, from academics into war-time educators, and social workers into emergency mental health counselors.

Unlike large international aid organizations with massive resources and abundant media exposure, these local groups work in relative obscurity, stretching precious resources to the brink.  Each of these Ukrainian-led and grassroots emergency solidarity efforts demands immediate support from donors outside the country.   BlueCheck was created precisely to sustain and expand its operations.

Study hard what interests you the most in the most undisciplined, irreverent and original manner possible.

What Type of Humanitarian Aid does BlueCheck Support?

With a mission “to overcome prejudice and strengthen human dignity, through creating safe space to teach teenagers and youth resilience in a changing world,” Tolerspace, based inKyiv, educates and trains educators in the field of tolerance and human rights.Since Russia’s war on Ukraine began, Tolerspace has been supporting teachers and students affected by the conflict. Many have survived shootings and rocket barrages, been subject to constant air radar sirens, and have been separated from their families. It provides mental health support to a network of Ukrainian teachers and has arranged evacuations of educators from conflict-affected areas. BlueCheck financial support has enabled ongoing mental health support of educators, including through webinars, and the provision of trauma-sensitive education to assist students and teachers with stress regulation. BlueCheck’s support helped Tolerspace launch a weekly psychological support group for educators and a weekly support group for child psychologists.

Established in 1998, the Women’s Perspectives Centre upholds women’s rights by implementing gender policy; combating violence against women and domestic violence; increasing the competitiveness of women in the labor market; and promoting women’s participation in decision-making processes in Ukraine. With the onset of Russia’s war, the Centre transformed itself into an emergency relief organization, operating five shelters in Lviv for the elderly, women with children, and disabled people. Financial support from BlueCheck helped launch two new shelters and fund protecting and meeting the basic needs of highly vulnerable, war-affected civilians.

Run by husband-and-wife team Pavlo and Lena Shulha, KidSave carries out emergency evacuations of orphans and families from conflict affected areas and communities in Ukraine.  Following theFebruary 24, 2022 Russian invasion of Ukraine, KidSave quickly pivoted from child orphan advocacy to rescue operations, safely evacuating tens of thousands of people to relatively more secure areas of Ukraine and into neighboring countries.  BlueCheck support has enabled the purchase of armored vehicles and emergency medical and relief equipment. Since the start of the war, Kidsave’s teams have rescued more than 22,000 individuals.

Established by three Ukrainian-Americans following Russia’s invasion,Ukraine Needs You provides critical mental health services to Ukrainians impacted by the war. Ukraine Needs You supports group therapy sessions operated by licensed Ukrainian mental-health practitioners assisting people forcibly displaced by Russian attacks, those suffering from psychological trauma andPTSD, people suffering from war-related injuries, and Ukrainians who have lost loved ones.  Staffed by 14 psychologists, the organization provides group therapy to 400 clients through35 group sessions per week. More than 1,500 people suffering from anxiety, depressions, loss, rape, trauma have attended sessions since the group initiated its work after the onset of the war. Patients have originated from Bucha, Kharkov, Kyiv, Lviv, and Odessa. Ukraine Needs You is determined to scale its activities to the ever-growing mental health needs of Ukrainians, during and far beyond the war.  BlueCheck support helps compensate clinicians performing therapy sessions and overall capacity building of the Ukraine Needs You clinician network.

Cash For Refugees provides direct financial assistance to the most vulnerable people in Ukraine, including mothers, the elderly and the disabled forcibly removed from their homes by indiscriminate Russian bombings, missile strikes and other attacks. With just $1,000, Cash For Refugees can aid 14 families for one month.  With BlueCheck’s support, the organization has assisted more than 500 refugee and internally displaced families. To date, Cash for Refugees has provided rapid financial support to more than 12,000 refugees or displaced families inUkraine.

Following Russia’s brutal attack on Ukraine, the leadership and musicians of Lviv’s premier philharmonic immediately transformed themselves into a humanitarian aid distribution hub. With its historic concert hall serving as a warehouse and staging area, the orchestra organizes the provision of emergency medical supplies to support people trapped in conflict-affected areas of Ukraine. It also provides medical institutions in eastern Ukraine with drugs, generators and life-saving medical equipment. Additionally, it coordinates the distribution of essential supplies (e.g., clothing, diapers, baby food) to IDP centers and orphanages inLviv sheltering children evacuated from other parts of the country. BlueCheck support has enabled the procurement of emergency medical supplies and vehicles.

Liki24, the number one online platform for fulfilling prescriptions and optimizing medicine sales to customers inUkraine, has make its technology and drug distribution services available for humanitarian program implementation.With BlueCheck’s support, Liki24 is able to is provide free or heavily subsidized medications for Ukrainians in need.

Thank you! Your submission has been received!

Oops! Something went wrong while submitting the form